The Flawed Brand of a Champion: Cam Newton 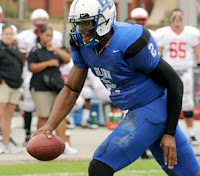 People sometimes don't realize it but they are creating brands of themselves.  Heisman Trophy winner Scam or I mean Cam Newton has developed quite a brand for himself.  Not many people want to see him succeed because of it.  He is a physical specimen at 6'6" and 250 lbs he runs incredibly well and has a very strong arm.  He was a man playing among boys during this college year.  That doesn't take away from what he's done as a person.  He started playing football at Florida.  Rode the pine behind some guy named Tim Tebow.  He was kicked out of school because he was in possession of a stolen laptop.  Did he take it or not?  Well, it's a lot like what happened next in his career.  He went to Binn College, played really really well and had his dad pimping him out to the highest bidder.  He told Mississippi State that he wanted "$180,000" for his son to go play there.  I highly doubt that, it started out higher and then ended up at that some.  The point is he had "plausable deniability".  He basically said that he didn't know anything about it... right.  No harm no foul.  The only difference was that he had the laptop in his possession. 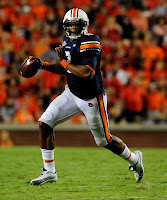 He goes on to lead the SEC in rushing and passing efficiency and wins the Heisman Trophy.  Some people say that it's going to be Reggie Bush all over again because of the chaos surrounding him.  Regardless the brand that he's created isn't pretty.  He has a black mark next to his name.  When someone talks about him they are always going to think about the incidents and what it means to his success.  Interestingly enough one place that isn't as forgiving as college football is the NFL.  The NFL loves "character guys".  Guys who come in and bring the morale of the locker room up, guys who the coach never worries about.  Tim Tebow was a great college player, and is yet to be determined on the NFL level but got himself picked in the first round because he is a "Character Guy".  Look at former #1 overall draft pick Jamarcus Russell, #2 Ryan Leaf.  Physically gifted, blessed, given an incredible amount of talent but NOT character guys.  Out of the league in 3 - 4 years and never coming close to meeting their potential.  The NFL is leery of these guys and Cam Newton may have won the Heisman, National Championship, and have some incredible tools but at the end of the day his brand is flawed. 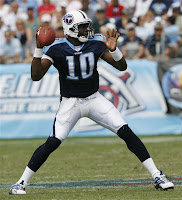 Another example of a non-character guy is Vince Young.  VY had/ some eerily similar  skill set as Scam.  He went in the first round #3.  VY had his ups and downs in the league but ultimately didn't play like a #3 pick.  He'll land somewhere else but he's not going to be around Tennessee anymore.  The interesting thing with VY was his lack of endorsements.  Spalding was one of the only major brands to pick him up.  He appeared in one commercial and that was about it.  His initial endorsement deal was with NetSpend a prepaid debit card company.  Basically they all just dried up.  VY wasn't holding up his end of the branding deal.  Known as a powter in the locker room VY didn't help himself with the way he handled situations.  It's a tricky game, the celebrity has to put on a good face to get good publicity which drives his or her appeal which earns him or her more money.  That didn't happen for VY and the results are pretty much a total loss of endorsement deals.

It will be interesting to see how Cam Newton's career progresses.  If he's a winner in the NFL and keeps his nose clean he'll get some deals, if not, well he already has the cards stacked against him.  His father obviously didn't do him any favors but from the beginning the kid had some question marks.  He's no Sam Bradford or Ndamukong Suh who came out of college looking like angels and pretty much have the world at their finger tips.  Both will make more money with initial contracts (partly because of the new CBA that we hope is put in place) because of "character".  It's too bad to see it go to waste but we ultimately pay for bad decisions we make along the way.  In Cam's case, he pays with millions he's lost or will lose with the endorsement deals.  Cam Newton, a Flawed Champion.  What a shame.
Posted by Bear Luke at 10:14 AM