The Battle For the Most Interesting Man in the World Title 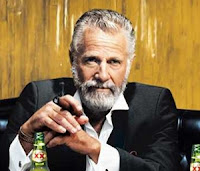 Make no mistake, there is a battle going on.  It's fierce, it's bloody, and it's foreign.  Sound like something out of Central Asia?  Well, you'd be mistaken, the battle is in the booze.  Beer as a matter of fact.  With the incredibly overwhelming success of the Most Interesting Man in the World campaign by Dos Equis created by Euro RSCG of New York, Heineken decided it needed to ride this wave too.  What makes this type of campaign so appealing that the Dutch brewers want to jump on board?  Lets take a look:

Historically beer drinking wasn't associated with class.  Many of the drinkers  had a rough edge to them and saw it as a recreation drink or relaxation drink.  Picture a beer at a baseball game, or tailgating at a football game, or best of all, "bartender give me a beer".  With this type of audience already firmly entrenched as a drinking base it was time to reach out to other drinkers.  A subtle message that is permeated throughout the campaigns is that everyone can drink a beer.  These campaigns can be as educational as they can catchy.  With this in mind it's interesting to see how similar yet different these two campaigns are.  The end goal is to have one of the catchier campaigns, reach a new audience and get people to buy your beer because of the campaign you put together.

Dos Equis:
I love this guy, he's my hero, he's who I want to be in 30 years.  Problem is that it's in 30 years.  What about in the meantime?  Well, Dos Equis has done a great job of inserting clips from "his life" throughout all of the the ads.  The ideas for their creativity has been astounding.  Essentially clips of a man throughout his life showing all of the amazing things he has done, stuff that you and I could only dream about.  His life reads like a story book or a novel.  He has rubbed shoulders with dignitaries, explored in places that are so remote not many people have been there.  Accomplished tasks that still show up in record books.  All while wooing women and smiling.  He's exotic with a beard.  His accent can't even be placed, is he Spanish?  Dunno, German?  Dunno... his origin is as interesting as he is.

As part of the overall message, Dos Equis has really appealed to the young professionals, shooting for the 25-40 year old range who still think they can be that guy.  It's a fun campaign that has changed the way we look at Dos Equis.  Having an exotic foreign name to it has helped too.  Having gone from almost complete obscurity to on of the most talked about beers out there, congratulations, it worked.  It worked so well that I now can't wait for the next Most Interesting Man in the World commercial.

A little known fact is that Heineken owns Dos Equis.  So the big question is why would they compete with themselves?  The answer isn't so easy to explain.  There are two sides to this.  In case you haven't seen the ads, there is a young man whose nationality can't be placed (the spot was shot in Spain with a French actor) but totes a thin beard and is dark haired.  He enters a room and immediatly greets all sorts of people.  These people range from Indian women to foreign dignitaries.  There is even a scene with a Martial Arts expert.  Essentially the man is good at everything and has done everything in order to meet and greet these people.  Everyone loves him and he too is one of the Most Interesting Men in the World.

To answer the question of why compete?  The overall success of the Dos Equis campaign had to be so overwhelming that the big whigs thought it would be Okay to introduce a little competition. Rivaling The Most Interesting Man in the World (TMIMW) is a very hard thing to accomplish.  He is distinguished and has a take on life that we would all love to have.  So to introduce a spunky young man into the mix and try to take some of that real estate was a tough task to ask.  Heineken did a really good job through the agency Weiden + Kennedy of Amsterdam in making this young buck "interesting".  The campaign is older than you would think. It started in 2010 and has been a viral hit for a while but starting in March 2011 went mainstream.

The music, the feats, the person, all scream a younger peppier version of TMIMW but will it last and will it win?  Heineken sure hopes so because of this being their flagship brand and precedence for the rest of the company.  They are confident that this globtrotting youngster will inspire people in their exploration of the world and their Beer. “Heineken wants to elevate our drinkers by showing aspirational behavior — our consumer knows how to navigate the world, is confident, open-minded and resourceful,” spokeswoman Tara Carraro told Ad Age.

Regardless Heineken is sure looking to brand itself very similarly to Dos Equis.  The difference being a peppy and young look trying to inspire young people to behave a certain way.  Heineken will never touch what Dos Equis as done and I think it's safe to that The Most Interesting Man in the World is still in a league of his own.  He was a first mover and carries a mystique to him that can't be matched. Our young Heineken friend looks like one of his disciples but as was with Peter or Paul, there is no replacing the Master.

Labels: Ad Campaign, Dos Equis, Heineken, The Most Interesting Man in the World